A problem with processing dual fiber and seed hemp crops is that about 20% of the stalks in the field are male, which begin to die off as soon as they have pollinated their female counterpart. This introduces inconsistent fiber quality if the male stalks are left on the field past the seed harvest. The optimal time to harvest the seed is also the best time to recover the male and female stalks and pre-process them into two more commodities, namely the bast fiber and hurd core.

Current decorticator technology crushes the bast into the hurd, then, through repeated beatings decorticates the outer fiber from the inner woody core. Hurd contamination is a constant issue during the process for much of it becomes airborne dust that has to be immediately collected to avoid potential fires. Throw in the fact crops need to be brought to a central pre-processing location within 40 km or the venture is cost prohibitive & you quickly realize why there is a latent fiber industry in Canada, legal to grow since 1998. 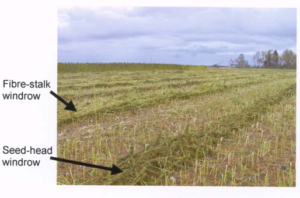 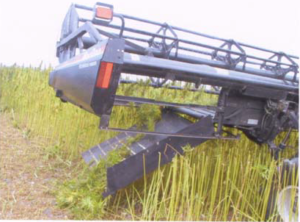 The process begins with harvesting the entire crop earlier in the season, when the seed is 55-65% brown, leaving a windrow of seed heads & a windrow of 4′ stalks. Once the seed reaches 80-90% it is recovered with a headerless combine to prevent early germination. The stalk windrow is turned, they then baled using a flax round baler.

These specially made bales are stockpiled under a pre-fab shelter at the edge of the field along with RD inside a container, ATCO trailer & mobile generator to power the ‘popup’ processing facility. Bales are placed onto a bale unwinder where they slowly unwind the stalks onto a moving table where they align & feed into the RD.  The machine peels the outer from the hurd- without any crushing or mixing- while the hurd is guided directly into a chipper. The hurd chips are blown into 1000kg totes for easy downstream handling. The peeled fiber is collected by a couple of carding machines that degum the raw fiber before dropping into channels that draw into thimbles to form cordage for easier downstream processing into high-value composites & textiles. Below is a picture of early testing of a Dolores dual-purpose variety-  NOTE: NO HURD CONTAMINATION!

Natural fiber that is stronger than fiberglas!